Whilst it’s hard to argue against the Government’s commitment to boost house building to achieve 300,000 new homes a year, the language used in recent statement fails to recognise the massive “elephant in the room.” Rhetoric aside, what about the infrastructure that needs to be built alongside such an unprecedented scale of development?

The Housing Secretary Sajid Javid has suggested that Councils in England could be stripped of planning powers if not enough homes are being built in their areas. The Prime Minister is targeting developers, even threatening to refuse planning permission to firms that have been slow to build new homes.

If you believe that “the dream of homeownership risks being denied to an entire generation … The result is a vicious circle from which most people can only escape with help from the bank of mum and dad,” then by definition, you must be referring to younger people and younger families.

Looking at school places alone, the 300,000 homes a year build-out target is likely to generate around 78,000 Primary School places. Is it responsible policy making to build at a rate that is not commensurate with the ability of local infrastructure to cope with the demands being placed upon it? Surely, issues like roads, health care facilities and schooling all need to be considered when managing the build-out of new developments?

Fortunately, the Education and Skills Funding Agency are currently looking at how Local Authorities establish developer contributions for education using standard pupil yield and school provision cost calculations. As part of this exercise, the ESFA are asking if LAs employ different approaches for new settlements, where pupil yields may be higher in newly constructed homes and whether multiple phases of development are known to create unusual patterns of need.

In terms of our experience at Cognisant Research, both these occurrences are commonplace. New builds certainly appeal to families with children, pre-school children in particular. The demands on school places are often exacerbated by multiple phases of development, with schools regularly full before developments have been completed. 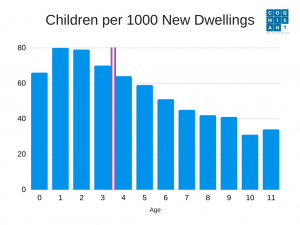 However, the key issue to understand is the variations in age between the children and how this will impact on pupil place planning. It is not uncommon to see new dwellings yield twice the number of primary school children in Reception as at the top end of the school, in Year 6. If a 1,000 dwelling development generated 60 four-year-olds, this would suggest a two form of entry school, but the same development might only yield 30 eleven-year-olds, requiring only one form of entry. Over time, the estate is likely to normalise with the demand for places seen across the rest of the authority and understanding how long this process takes is key to planning how best to upscale provision and accommodate the initial bulge in demand.

Effective long-term planning and resource allocation, between Central and Local Government, is key to responsibly meeting the demands of the UK housing market in terms of houses and the infrastructure to support their new residents.